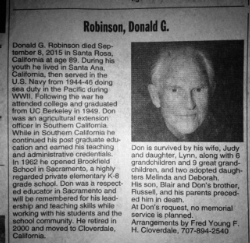 Thank you, Mr. Robinson, for the legacy you left behind; generations of well-educated, open-minded individuals. Rest in peace.
Robinson, Donald G.

Donald G. Robinson died September 8, 2015 in Santa Rosa, California at age 89. During his youth he lived in Santa Ana, California, then served in the U.S. Navy from 1944-46 doing sea duty in the Pacific during WWII. Following the war he attended college and graduated from UC Berkeley in 1949. Don was an agricultural extension officer in Southern California. While in Southern California he continued his post graduate education and earned his teaching and administrative credentials. In 1962 he opened Brookfield School in Sacramento, a highly regarded private elementary K-8 grade school. Don was a respected educator in Sacramento and will be remembered for his leadership and teaching skills while working with his students and the school community. He retired in 2000 and moved to Cloverdale, California. Don is survived by his wife, Judy and daughter, Lynn, along with 6 grandchildren and 9 great grandchildren, and two adopted daughters Melinda and Deborah. His son, Blair and Don’s brother, Russell, and his parents preceded him in death. At Don’s request, no memorial service is planned. Arrangements by Fred Young F.H. Cloverdale, 707-894-2540