About Our Founder, Lue Robinson Clifford

CLIFFORD, Lue Robinson
'The future belongs to those who believe in the beauty of their dreams.' Eleanor Roosevelt

In 1946 at age 19 Lue Ferguson read a short novel by James Hilton entitled, Goodbye, Mr. Chips, the story of a beloved schoolteacher and his 43-year tenure at Brookfield School for boys in England. After reading 'Goodbye, Mr. Chips', Lue wrote in her diary, 'Someday I will be Headmistress of my own Brookfield School. Someday, I'll be Mrs. Chips.' Lue found a calling that inspired a lifelong devotion to education and one that would eventually influence thousands of children in Sacramento, California.

Lue married Don Robinson and in 1963 with a loan from her father and help from relatives, Don and Lue Robinson opened Brookfield, a private elementary school located inside rented facilities at the old Salvation Army headquarters in Sacramento. Lue taught the humanities and Don handled math and science. They began their first year with nine students and ended it with 27. Don was the business administrator and Lue created curriculum. Complete Anglophile that she was, originally much of Lue's curriculum came from England.

After their first year, Brookfield moved to Riverside Blvd. in William Land Park where the Robinsons worked together as Headmaster and Headmistress for the next 36 years. Enrollment increased to full capacity with waiting lists for most classes. Ronald Reagan and Supreme Court Justice Anthony Kennedy sent their children to Brookfield, as did the artist Wayne Thiebaud - famous and not-so-famous parents sought quality education at Brookfield.

Lue was a grammarian at heart. She loved the power of language, literature and declamation. Her idea of fun was to diagram complicated sentences. She believed strong language skills provided the best possible way to excel in life. Her goal was simple: read better, write better, and think better. She set high standards and settled for nothing less. Secretly she relished eccentrics and individualists in a classroom - the naughtiest ones as well as the paragons - those kids who questioned and challenged her along the way. Lue had a knack for arousing enthusiasm in all kids, for awakening natural curiosity and for balancing structured lessons with creative spontaneity.

Wayne Martin who today heads the School of Philosophy and Art History at the University of Essex in England, attended Brookfield many years ago and recently wrote:

'Lue Robinson instilled in particular an appreciation for the value of clear and elegant writing, and she cultivated a keen awareness of the ways in which micro-features of a sentence or paragraph can make it come alive or fall flat. That is a lesson that has certainly stuck with me. I try to pass it on to my own university students, and I practice it as best I can both as a writer and as an editor. I wish that there were some way of surveying the professional lives of the students whom (sic.) Mrs. Robinson taught. I am betting that such a survey would turn up quite a number of people who make their living by expressing ideas clearly. I do recall an episode in the early 1990s. I was finishing up my PhD at Berkeley and I attended a workshop on dissertation-writing. At the end, the woman who was running the workshop introduced herself to me. She was also Brookfield alum, a contemporary of my older sister. She had also made a career out of spreading the gospel of good writing.' Wayne ended his message with these lines, 'Human life is essentially mortal. But a really good school can live forever. That is a form of immortality in which Lue rightly participates.' Wayne is quite right. Outstanding teachers affect eternity for their influence knows no bounds.

From 1963 to 1999 Lue developed, nurtured and enhanced the lives of countless students. In the novel, Mr. Chips becomes Headmaster of Brookfield during World War I. Years later he dies peacefully in his bed and his last words are the names of all the boys he taught over the years. If Lue taught you, I'm sure your name was on her mind when she passed away on February 25, 2014 at age 87.

William Ward wrote, 'If you can imagine it, you can achieve it. If you can dream it, you can become it.' Lue is living proof that dreams really do come true. On behalf of those who knew and loved her and for all those whose lives she enriched may I say, 'Goodbye, Mrs. Chips.'

Lue was predeceased by her parents, Don and Thelma Ferguson, her sister, Carma Jackson and her brother, Jack Ferguson. She is survived by her sister, Dawna Sutton, her daughters, Melinda Donluekin and Debby Kane-Wood, her grandchildren, Josh, Ben and Felicity; ten nieces and nephews and many dear friends, including Patty Waltermeyer, Maria Martin and Howard and Verla Walker.

Lue Ferguson Robinson Clifford, Sacramento Innovator 1927-2014
Published in The Sacramento Bee on May 11, 2014 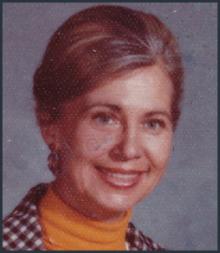